Into the ruins of Methegrist

Fellow role-players, here are my notes for Session 2 of our latest D&D5e game, which was held on Sunday, 25 January 2015:

After meeting in Quarevarr late one spring, a new adventuring party investigated reports of a ghostly knight haunting the border village. As the team headed north into the Wayreth Forest, it encountered Orcs, winter wolves, and a mysterious sorceress.

The group resumes its pursuit of the apparition, which leads the way to the ruined tower of Methegrist. Skald Rowan recalls tales of Jahar, the first Moonwatch Paladin to strike one of his fellows at the instigation of an evil imp.

Sam and Rowan search the area and find recent tracks. They soon find four other people poking through the rubble. A Dwarf in chain armor aims a crossbow at the newcomers, and says that his group arrived first and is thus entitled to first dibs on any treasure.

Meanwhile, a female Elf in dark leather crouches by a tree, while two humans holding clubs stand watch. Cal isn’t intimidated by gruff Karrik, and Santiddio flirts with Lisstra. The shade of Jahar sinks into the ground, and Maddie finds a trapdoor concealed by some brush.

Santiddio slides down a ladder into a stone chamber. The Rogue finds an old rectangular rug and a door swollen by moisture. Both bands follow. Rowan rolls up the rug but finds nothing under it, while Paladin Cal Detects Evil but senses divine benevolence instead. Ranger Sam and Barbarian Maddie pry open the door to the west. In the next room, they find a statue of a knight in antique plate armor and the holy symbol of Paladine, god of justice. Cal offers a prayer, and Sam is healed from his earlier injuries.

Sam and Perogen sketch a rough map. Sam notices a loose flagstone, beneath which he finds the following:

Santiddio peeks into the next room and sees double doors to the north. The Half-Elf steps in but takes damage from a spike trap. Maddie pulls him back with a rope.

Half-Elf Rowan treats Santiddio’s injuries and helps him and Sam figure out which floor tiles are trapped. Cal asks Perogen to keep an eye on Karrik and company, and the Wizard agrees that he doesn’t trust them either.

Through the double doors is a series of halls lit by braziers. Perogen is drawn to the Pool of Remorse, where he is reminded of a letter from a dead colleague. The human gains confidence from the vision.

Santiddio gazes into the magical pool and feels fresh guilt for not talking to his mother before he left home. He encourages Lisstra to join him at the water.

Sam secretly regrets resenting his brother, who took more after the Ogre side of the family than the Irda one. Cal and Maddie resist the temptation to look in the pool, and Karrik and his team are too busy looking for tombs to raid.

The explorers turn east, and the braziers in this area radiate an unholy aura. Cal prays to his patron deity, Kiri-Jolith, as he extinguishes them. A distant scream echoes. The wanderers then find red flaming runes on the floor and hear the voice of the imp.

The diminutive devil taunts them and poses a riddle — if they can guess his true name, he will leave them alone:

First is number whose letters count,
True to its name’s amount,
Then you can subtract a letter,
But adding six would be better.
To get the second part,
Then comes the sound of the start of start,
And finally, with a blast,
Sound out the last of last.

The imp then tries tempting the spelunkers with untold riches. Even with the door closed, Karrik’s squad turns on them! Karrik and Lisstra swing at Cal, while the human warriors attack Maddie, who rages.

Sam fires an arrow at Karrik, and Perogen casts Acid Spray at the Dwarf. Rowan misses him, but Santiddio’s rapier finds its mark. Cal orders the treasure hunters to drop their weapons, and Rowan asks Lisstra and the two goons to leave with their leader rather than fight to the death. They reluctantly do so.

Perogen casts Detect Magic and confirms that Karrik was merely greedy and thus prone to the imp’s influence. The white-robed mage also perceives auras past a door to the northwest.

Behind it, the party finds two glowing fonts and the kneeling ghost of Jahar. Cal and Santiddio pay their respects alongside the fallen knight. Sam finds vials and fills them with holy water, or the “tears of Paladine.”

Cal, Sam, and friends eventually solve the puzzle by naming the imp “Fortenst,” who disappears. Santiddio and Rowan also find the following items:

Including the previous haul, each party member present gets 108 steel pieces. Maddie calls the rest of the group back to the font chamber, where Jahar’s shade is finally fading. In addition, the ground shakes, and the dungeon begins to fracture!

The would-be heroes race out of the ruins as the walls crumble. A fissure opens in the ground, swallowing Methegrist and releasing dark filaments. The night sky is blotted out as magical murk spreads from the site. 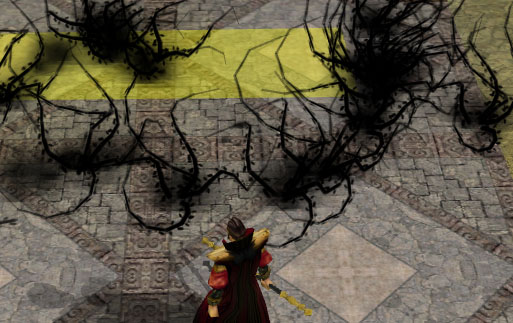 Sam, who can see in darkness, hastily leads the way back to Quarevarr. Cal and Perogen urge the villagers to evacuate beyond the darkness. Mayor Geldren Bressar thanks the newly-confident team….

While we won’t be meeting virtually this coming Sunday, 1 February 2015, because of the Super Bowl, I look forward to continuing our adventures! Don’t forget to update your characters on Obsidian Portal to Level 2.

Byron and Sara, I hope you’ll be able to fully rejoin us soon! We’ll also have to see when the “Vanished Lands: Vistel’s Expedition” and Jason’s “Channel 37” face-to-face groups will meet next. Stay in touch, -Gene

Ascendant campaigns can view previous versions of their pages, see what has changed (and who did it), and even restore old versions. It's like having a rewind button for your campaign.

We've already been saving your edits, so if you upgrade now you will have instant access to your previous versions. Plus, you have our no risk refund guarantee , so there's nothing to lose.

"Land of Lost Souls" D&D5e Session 1 Into the woods

I'm sorry, but we no longer support this web browser. Please upgrade your browser or install Chrome or Firefox to enjoy the full functionality of this site.